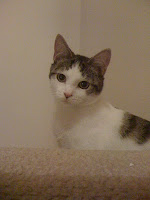 I'd often thought that Bella might want a playmate - she's very interactive, talks a lot and is into everything. I'd thought now and again that she got a little lonely or bored while I was out seeing other cats. So, every now and then I'd think "does Bella need a little friend?". This was difficult, as she's also a bit of a princess, and had got used to having me to herself for over 4 years.
She'd also not shown too much affection with other cats that came around, until Henry started visiting, and more recently Jussi from across the road. She'd happily tolerate both cats in the garden, and would even roll over on her back in front of them. She was still a little nervous though, as, if they got too close they'd get a warning hiss. But I'd started to think, perhaps......
Still wasn't thinking about this particularly seriously though, until one day at Animals in Distress I met a lovely boy kitten, about 4-5 months old. Now, I must have picked up and cuddled hundreds of cats in the time I've been visiting, and now and again, I'd wonder if any of them could come home to stay with us. But not until I held this little boy did I feel that any of them could be the one.
He felt very gentle, with lovely soft energy, and I found the words "I'd be good for Bella" floating around in my head somewhere. I trusted my intuition on this. I knew that if I thought for too long I'd talk myself out of it. I realised that there was a huge risk this might not work, but if I didn't try, I'd never know.
So, Dylan came home to live with us a few days later - now about 3 months ago. He lived in a little puppy pen in the corner of the lounge for a little while, so that Bella could get used to him, and he had somewhere of his own to feel safe. Every now and again I'd take him out for cuddles, and let Bella sniff him.
On that first day, when Bella first saw him, she was most unimpressed! I picked up thoughts of "what's that doing there?". She was clearly very upset and confused, so I needed to be sure I spent lots of time with her reassuring her over the next few weeks. I knew that this would all take time - as long as it needed to - this is something that can't be hurried. And I knew that I could either help or hinder the process. Patience was needed from me, as well as making sure my energy was always helpful for both of them. There were times that Bella was so upset I was in tears too! We've got through loads of Feliway, and Bach Flowers have been enormously helpful too.
She's a bright and intelligent girl, and I could tell she was trying to learn to deal with this. There were times she was genuinely interested, and there were thaws, even though the next day it often felt like we'd retreated a couple of steps again.
After a few weeks - when I knew it felt right - I started to let Dylan out of the pen to find his way around the house. The first time, he chased Bella up the stairs! Since then he's not stopped chasing her, and somehow the little gentle being I first met seems to have completely disappeared. Then, I'd leave him out all day, even when I was out, but he'd go back in the pen to sleep at night, until eventually I judged it was right to do away with it all together.
So far, it's been tough at times, certainly fun at others, as well as both interesting and challenging. Now and again, if I'm honest I do still get the odd day where I wonder whether I did the right thing. But they are mostly getting on very well now - it's lovely to see them both fast asleep on chairs next to each other in the kitchen, and now and again they'll touch noses. As long as he's being well behaved and quiet Bella does seem really happy to have him around. And he idolises her! Which is probably why he doesn't leave her alone. And of course, despite the fact that he's now bigger than she is, he is still only 8-9 months old - I'm sure that he'll calm down as he grows up.
Posted by Jean at 09:12

A unique, caring service in central Manchester and around

Jean
Manchester, United Kingdom
My name's Jean and I have a Pet Sitting and Pet Reiki business called Whiskers Pet Care, based in Manchester. I have a passion for helping living beings to have the best life possible. Even when just coming to pet sit, I've always got the Reiki energy with me, and can help to ensure that your pet is happy, calm and relaxed while you're away. Additionally, I am an animal Reiki practitioner and intuitive communicator. I've been called upon many times to use these skills to help an animal be at peace and comfortable as it approaches the end of its life, something I feel very honoured to be able to do. I also volunteer at Peggy Henderson's Sanctuary in Sale, helping the residents there to recover from both physical and emotional hurt, or just to feel happy and safe until they can be found a permanent new home.